South Ari Atoll is a great place for a family holiday. Arriving here, you find yourself in a real paradise, as in the picture in a fashion travel magazine - clean beaches, around coconut palms and banana trees. Relax and think about nothing!

Advantages and features of a beach holiday in South Ari Atoll

The best period for a beach holiday in South Ari Atoll is the so-called dry period, which starts in January and lasts until April. In principle, tourists also come here during the rainy season, but during this period there are much fewer sunny days - about two or three a week.

The beaches on the South Ari Atoll are very good, sandy, both the coast and the bottom. This place is considered one of the best in the Maldives for diving. 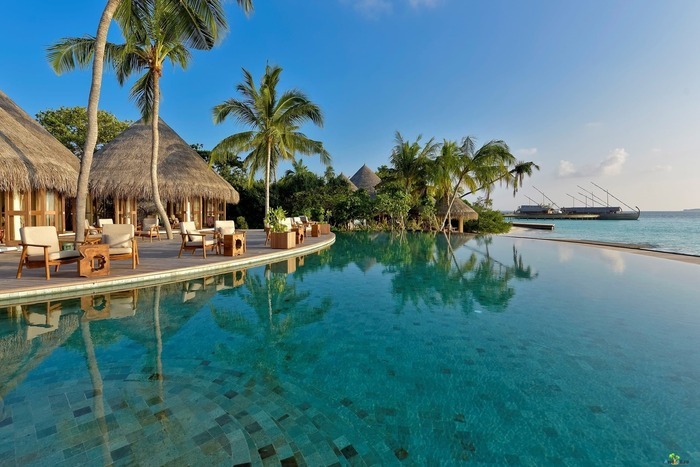 South Ari Atoll is a great place for families with children. Here is the capital of the entire Ari Atoll - Mahibadhu.

You will see small islands on which the ruins of ancient Buddhist temples have been preserved, as well as coconut palms and banana trees grow here. By the way, these places are also famous for the fact that wonderful watermelons are grown here.

South Ari Atoll is very respected and appreciated by divers, because there are many underwater caves, and the world under the water is very diverse and rich. You will be able to see reef sharks, tuna, moray eels, parrot fish and many other inhabitants of the sea. In coastal waters, sea turtles are quite common.

South Ari Atoll is famous for its excellent hotels with high-level service. The locals are very hospitable and treat tourists very well. South Ari Atoll is home to musicians who are known all over the Maldives - they perform national music that you will definitely like and add romance and exoticism to your stay here.

It is convenient and profitable to fly Chisinau-Male or Bucharest-Male, but you need to take into account that there are no direct flights in this direction, only with transfers.

The most comfortable option is to take a Turkish Airlines flight, where meals are provided on board. If the transplant in Istanbul is delayed, then you will also be provided with food. If the transfer in Istanbul takes more than eight hours, then you will also be provided with a hotel room. But, as practice and experience show, Turkish Airlines planes fly quite often, so there are almost never long transfers.

Alternatively, you can fly from Bucharest with one of the following airlines: Emirates, Qatar Airways, Air France or Condor Airlines. The last airline is not very convenient, but on board meals and luggage are included in the price, pretty good service.

Flydubai - flies from Bucharest with a transfer in Dubai. Tickets are much cheaper, but there is no food on board, and only hand luggage is included in the price. The main luggage is paid separately. Relatively good connections, you do not have to wait long for a transfer.

Wizz Air flies from Bucharest with a stopover in Abu Dhabi or Dubai. This is the cheapest option, but there are disadvantages: they don’t feed on board and the docking is very long - up to a day. This option is great for those who want to make a stop in the United Arab Emirates and see new and interesting places along the way.

A speedboat or seaplane will take you from the airport to your hotel.

When ordering a tour at a travel agency, you can count on a meeting at the airport and the subsequent flight by seaplane - that is, you will be taken to your hotel.

When traveling independently, we recommend that you book a boat on the website https://www.atolltransfer.com/. You can also use the services of local airlines Trans Maldivian Airways and Maldivian Seaplane, which make domestic flights.